December  9, 2020- President of Israel Reuven (Ruvi) Rivlin hosted the launch of the Beresheet 2 project, the second Israeli spacecraft to be launched to the moon. Minister of Science and Technology Yizhar Shai, Founder of SpaceIL Kfir Damri, CEO of Space IL Shimon Sarid and CEO of IAI Boaz Levy also participated in the event.

President Rivlin: “We are setting out on a new path, familiar but different, at the end of which we hope to land three spacecraft safely on the moon. This project will extend the boundaries of human knowledge with ground-breaking scientific experiments, helping us to understand better the universe in which we live.”

SpaceIL, in cooperation with Israel Aerospace Industries and the Israeli Space Agency at the Ministry of Science and Technology have initiated the Beresheet 2 project, as part of which the second Israeli spacecraft will be sent to space. Beresheet will comprise three spacecraft – one orbiter and two landers – and will be launched in around four years. Along with scientific missions and international cooperation, the project will be aimed at inspiring young people across the country from all parts of Israeli society.

The ceremony included the online participation of schoolchildren, students and volunteers from the six space centers around the country, representing the next generation of engineers, innovators and dreamers. 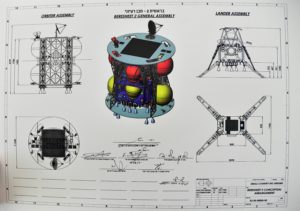 “Just a year and a half ago, we were here together, when Israel held its breath and looked to the stars. We anxiously watched the Beresheet spacecraft on its historic journey to the moon. We watched its long journey, were in wonder at the researchers and were filled with pride at the Israeli daring and ability that flourished right here and at the groundbreaking work of Space IL. We were disappointed, and realized that we had to start once again from the beginning. Today, we are setting out on a new path, familiar but different, at the end of which we hope to land three spacecraft safely on the moon,” said the president.

“The Beresheet 2 mission to space is unique. If it succeeds – and I am sure it will – this project will extend the boundaries of human knowledge with ground-breaking scientific experiments, helping us to understand better the universe in which we live. By launching Beresheet at the present time, when the world is dealing with a health crisis the like of which has never been seen, is not to be taken for granted. In the shadow of the virus, it becomes clear to us how big concepts like science, medicine and research can fundamentally shake the foundations on which we live. It becomes clear to us how much we have to learn, not just on distant planets and in boundless galaxies, but here on our planet,” said the president.

CEO of IAI, Boaz Levy: “Innovative and groundbreaking technology, sparking the imagination and facing technology challenges are an integral part of IAI’s experience. IAI brought Israel into the small club of space nations, and we see the continuation of our partnership with SpaceIL as natural. Together, we have reached spectacular achievements in civil space missions, swept up the whole country and many around the world with the “Beresheet effect” and ignited a spark of interest in science and technology in Israeli children. IAI’s advanced technological capabilities brought Israel to its historic mission to the moon, and we are happy to join our partners SpaceIL on the next mission – Beresheet 2. IAI will continue to lead Israel’s space industry to develop new technologies based on its engineering and knowledge, its capabilities and human capital, which are the best in Israel.”

Minister of Science and Technology, Yizhar Shai: “The Ministry of Science and Technology and the Israeli Space Agency are proud to be partners in the second chapter of the Beresheet mission. This is a groundbreaking and inspiring initiative, with determined innovators who are an example to all those with an eye to the future. We are pleased to announce that in conversations with the Israeli Space Agency, seven countries from five continents have expressed an interest in participating in the project, and that in conversations with the United Arab Emirates, the subject has been raised several times. I have no doubt that Beresheet will once again spark our imagination, redefining the boundaries of the possible and securing Israel’s status as a powerhouse of innovation.”

CEO of SpaceIL, Shimon Sarid: “We are aiming high with Beresheet. Not just to outer space, but to the long-term future of the State of Israel. We will do it by raising curiosity and hope, the ability to dream and realize and through strengthening technological education, research, science and engineering for Israeli students. By doing so, we will ensure Israel’s technological mobility for today’s schoolchildren who are tomorrow’s scientists and engineers.” 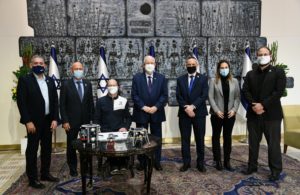